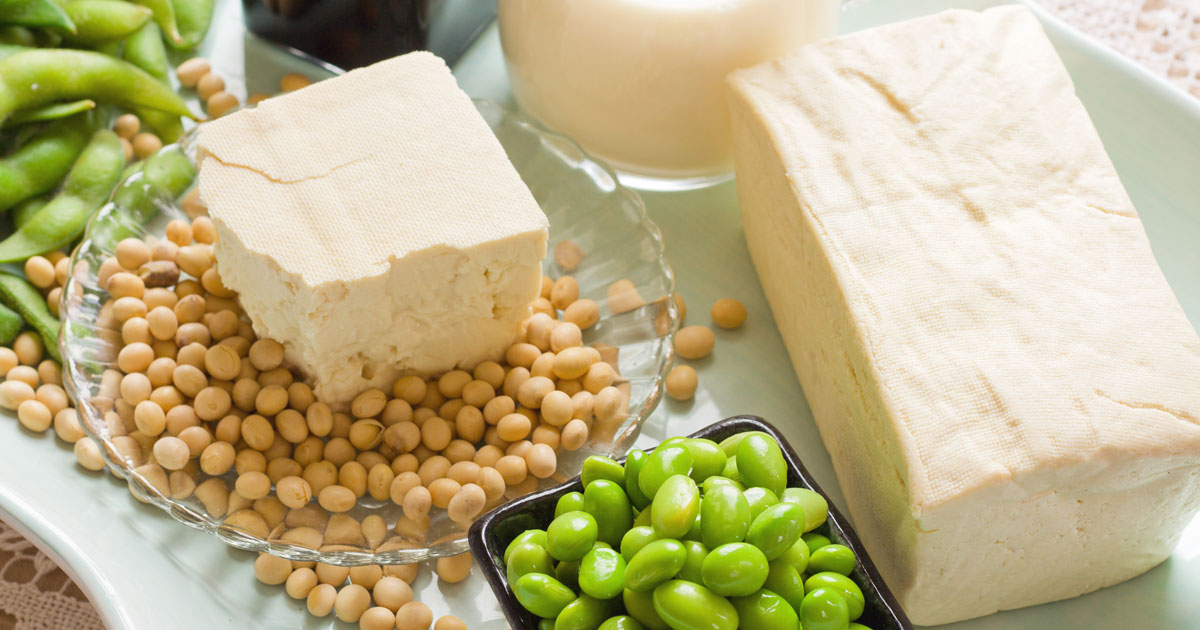 A Look at Soy and Menopause

Let’s face it — when you are suffering with the less pleasant side effects of menopause you would do anything if you thought it would make you feel better. Just a quick search on the internet will throw out details of a huge range of sites promising relief from the worst symptoms, including anecdotal provenance of ancient remedies or so-called scientific facts. During your search, you may also stumble across soy being used as a natural remedy for menopause. So, how are soy and menopause connected, and can it actually help?

Many people believe that soy is helpful for the relief of menopause symptoms, especially hot flashes, but this is based on mixed evidence.

Let’s explore the methods and pros and cons of taking soy and find out which types are more likely to help. Then, you can make up your own mind.

Soy is high in isoflavones, which are a type of phytoestrogen. None the wiser? Stay with me. Phytoestrogens are chemicals found in plants that work like estrogens. It’s thought that the human body may be able to use them as a substitute for human estrogen.

Soy comes in many forms, and scientists have spent a lot of time researching it, which is the best way to access the phytoestrogen and use it as a menopause symptom aid. While it is difficult to compare studies, it seems soy isoflavones naturally present in soybeans work better than soy protein for relieving hot flashes. You can buy soy isoflavones from the drug store or health food shop in an easy-to-take capsule form. You might also find soy isoflavones included in multivitamin and mineral tablets advertised specifically as menopause relief products.

Don’t fancy popping pills? Maybe you could think about changing your diet.

Adding Soy to Your Diet

It’s interesting to note that Japanese people apparently suffer hot flashes and night sweats much less than Americans. One study found that only 7% of Japanese people reported hot flashes as a symptom of menopause compared to 55% of people in the U.S. In fact, there isn’t even a Japanese word or phrase for hot flash.

This could be down to the traditional Japanese diet, which is weighted towards vegetables more than meat. They eat a lot of vegetable protein, including products like soy-based tofu rather than animal protein.

So What is Tofu, and How Do You Eat It?

Legend has it that tofu (also known as bean curd) was created by accident by a Chinese cook who curdled soymilk by adding seaweed. It was actually a favorite food of Benjamin Franklin’s. While in London in 1770 he wrote about tau-fu cheese made with soybeans (which he called Chinese caravances) in a letter to John Bartram in Philadelphia.

You can probably pick up tofu in a variety of flavors and textures in your nearest large grocery store, health food shop or market. You might find it included in ready prepared noodles, desserts, pizzas, sausages and slices, and you can also buy it fresh, dried, refrigerated and frozen, with or without added vitamins and calcium.

It is quite bland until you add flavor but very versatile — you can bake, fry or grill it and use it in recipes like stir fries, curries, pasta dishes and salads.

You May Also Like:A Menopause Diet for a Healthier, Slimmer and Happier Experience
Related Search Topics:

Pour Yourself a Glass of Soymilk

Not fancying tofu, even as a replacement for meat in your favorite meal? You could just drink soymilk.

Studies by Delaware University involving more than 1,200 people revealed that drinking two 16-ounce glasses of soymilk daily led to a reduction in the frequency and severity of hot flashes by up to 26%.

It all sounds healthy and harmless doesn’t it? But there are some people who should be careful not to eat or drink too much soy.

The Risks of Soy

Tofu and all soy products contain high quantities of oxalate, which can cause kidney stones, especially in those who tend to suffer from them.

Experts also advise that soy intake should also be limited to no more than four servings a week in people who have been diagnosed with estrogen-sensitive breast tumors.

There’s also a risk that people who choose soymilk may not realize that many brands add significant amounts of sugar to make the milk more palatable.

It seems like everything else, soy should be consumed in moderation — whatever form you ingest it in. There are pros and cons to using soy as a treatment for hot flashes, but if you aren’t high risk for kidney stones, soy allergy or estrogen-related health conditions it might be worth giving it a go.